A test stand for determining Qsmax, EG and PQR characteristics of gaskets in line with EN:13555:2013. The tests are performed at room temperatures and at temperatures increased up to 800°C . The tests may be performed under variable loads and temperatures. The determined parameters / coefficients may be used directly in calculations for flange-screw joints made in line with the EN 1591-1:2009 and …:2014 standards. The stand allows for conducting other tests, consisting in the determination of correlations between values such as: the variability of the material thickness, load and temperature. 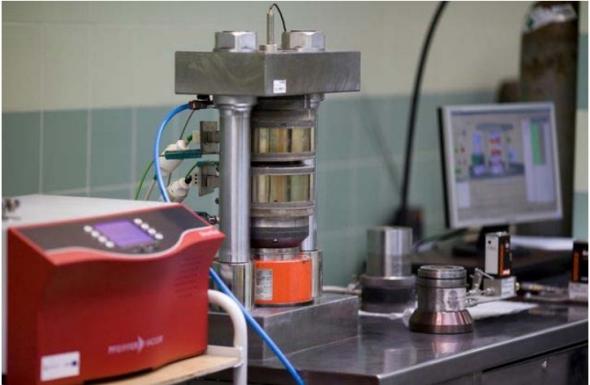 General view of the test stand 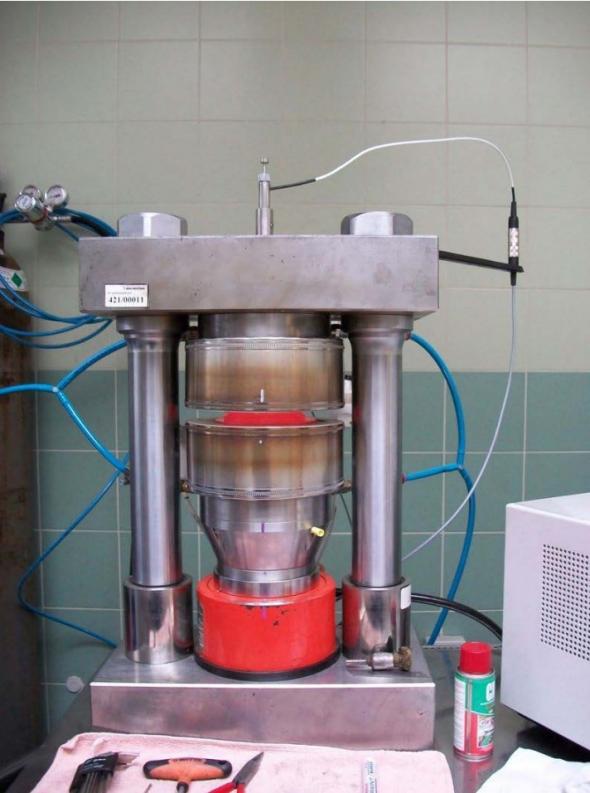 Testing at the temperature of 800°C. The picture shows a heated seal and the face surface.

A test stand for determination of leak level in line with the algorithm specified in the EN 13555:2014 standard. Tests are conducted at room temperature under a variable load. The tests are used to determine the Qsmin(L) and Qmin(L) values. The helium testing pressure may reach up to 160 bar. The determined coefficients may be used directly in calculations for flange-screw joints made in line with the EN 1591-1:2009 and …:2014 standards. The stand allows for conducting other tests, consisting in the determination of correlations between values such as load, pressure and leakage. Continuous measurement of leakage is performed by vacuum method using a helium spectrometer. 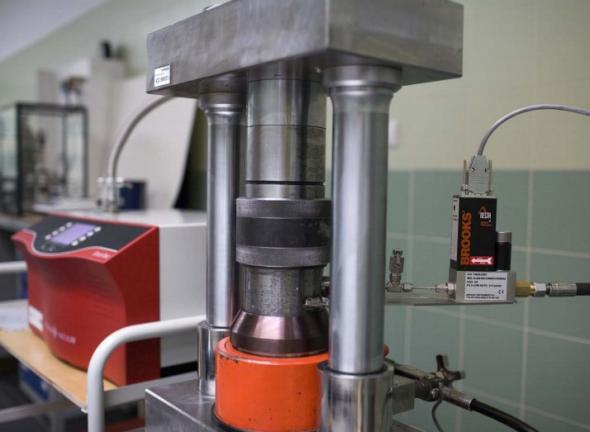 General view of the stand for leakage tests.

A sample graph of the leakage and loading correlation.

New test stand used to determine the leakage level at elevated temperatures and to determine the mechanical properites of gaskets in accordance with the algorithm described in EN 13555: 2014-08. Also used to determine calculation factors according to ASTM F3149-15 used to perform flange connection calculations according to ASME Code p. VIII. The press combines the capabilities of both older PowerPress 1 and PowerPress2 sites. In addition, it is possible to test class NPS 4 class 300 gaskets. The tests - also leak-tightness (!) - can be carried out at room and elevated temperatures up to approx. 600 oC, under variable load. The values ​​Qsmax, EG, PQR, ΔeGcI, Qsmin (L), Qmin (L) and m and y are determined. The helium test pressure can reach 160 bar. The determined values ​​of coefficients are used directly for calculations of flange-and-bolt connections according to EN 1591-1: 2009 and ... / 2013. At the test rig, it is possible to conduct other tests based on determining the correlation of quantities such as: pressure force, pressure and leak. Continuous measurement of the leak is performed using a vacuum method using a helium spectrometer. 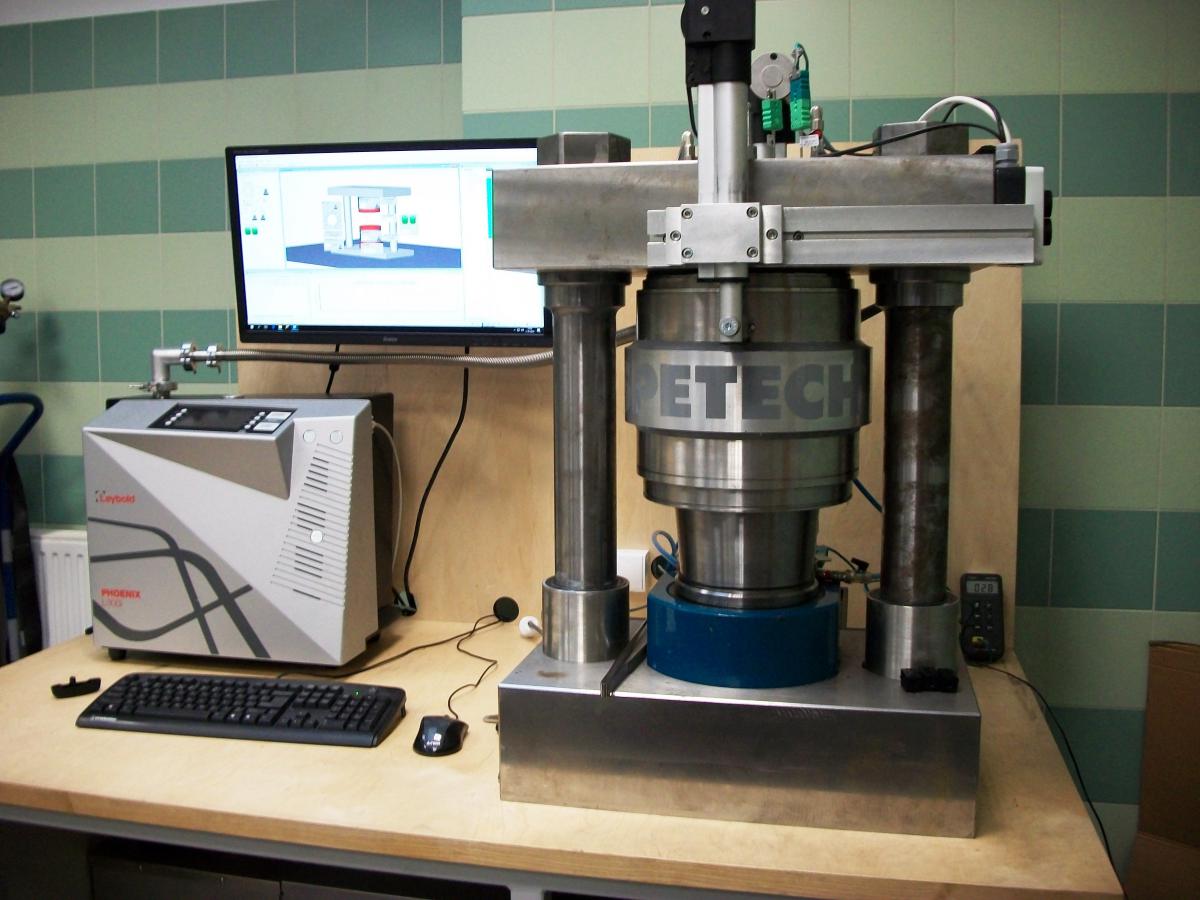 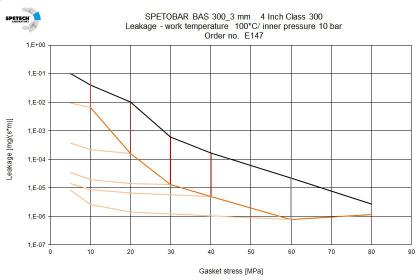 A sample graph of the leakage and loading correlation at 100oC.

New method for calculating flatness calculation coefficients for ASME Code s. S. VIII and European EN 13445-3 and EN 13480-3. The method is based on determining the gasket load characteristics - leakage level. Tests are performed on presses such as those used for tests according to EN 13555. The loading algorithm is changed. 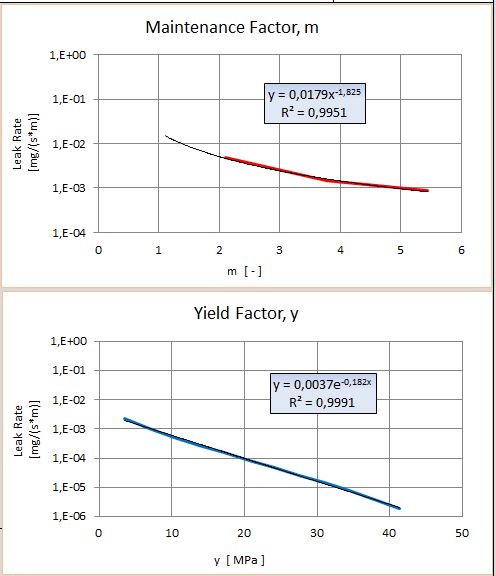 The method allows for the determination of relaxation and creep. The test is conducted using special instruments and the temperatures used are RT (Room Temperature), 100 and 200°C. Due to the characteristics and the structure of the test stand it is impossible to test gaskets, while it is possible to test material samples used in flat seals.  The stands allow for performing tests of various materials – from soft elastomeric materials up to pure metal seals. The aim of the tests is to provide values regarding the rheological behavior of materials, mostly in increased temperatures.

The stand is used for the determination of compressibility of soft materials used in the gasket structures. It also allows to determine the elastic recovery and the energy of deformation. Both the value of compressibility and the elastic recovery have a fundamental meaning in the process of flat gasket selection. The values provide information on the level of the gasket’s ability to “adjust” to the face surface and about how will it behave in operation as well as the conditions of joint displacement in connection to the operation. 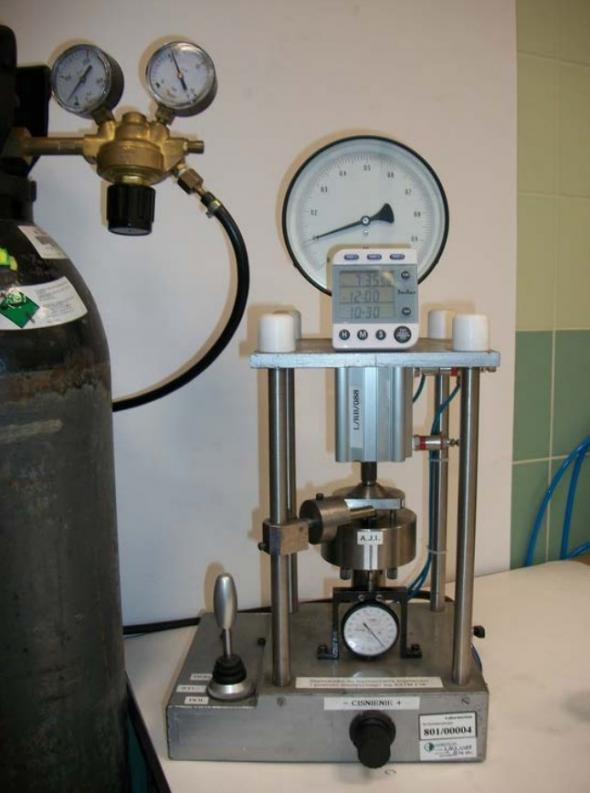 Course of a test

8. Stand for the determination of leakage level in flat gaskets in line with VDI 2440 (TA Luft requirements)

A stand used for the determination of leakage in flat gaskets. The results are compared with the requirements of the VDI 2440 and TA-Luft requirements and – if fulfilled – the laboratory issues a certificate of conformity with the TA-Luft regulations. After holding a clamped flange joint in a temperature dependent on the gasket material for 24 hours, the leaktightness test is conducted in room temperature. The pressure of the medium (helium) is 1 bar. The measurement of the leakage is performed by vacuum method using a helium spectrometer. 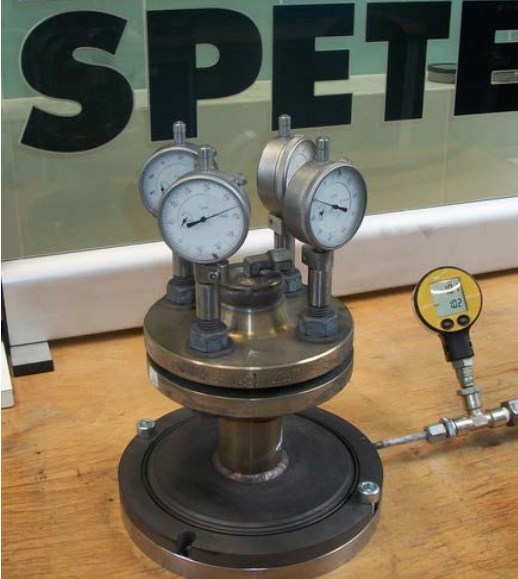 View of the stand after clamping and before applying the temperature. 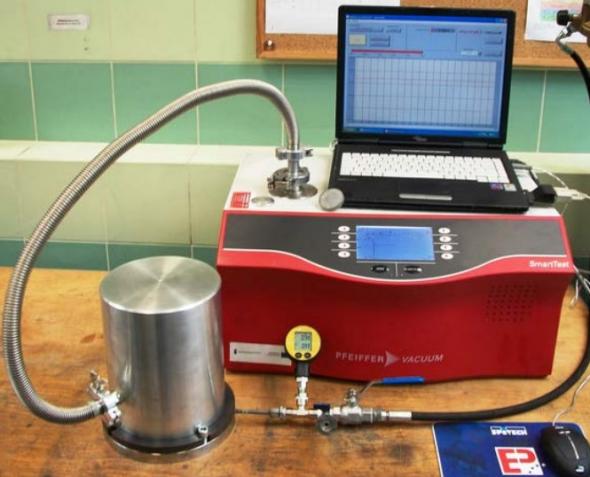 View of the stand during a leakage test.

9. Facility for the determination of leakage level in gland seals in line with VDI 2440 (TA Luft requirements)

A stand for the determination of leakage in gland seals and the determination whether the seals are in conformity with the VDI 2440 requirements and TA-Luft air pollution control regulations. The laboratory issues certificates of conformity with the TA Luft regulations. The leakage measurement is made in temperatures up to 500°C and after performing an assumed number of up/down mandrel cycles. Also longitudinal stress on the packing and the pressure of the medium (helium) are preset values in the test. Continuous measurement of the leakage is performed by vacuum method using a helium spectrometer. 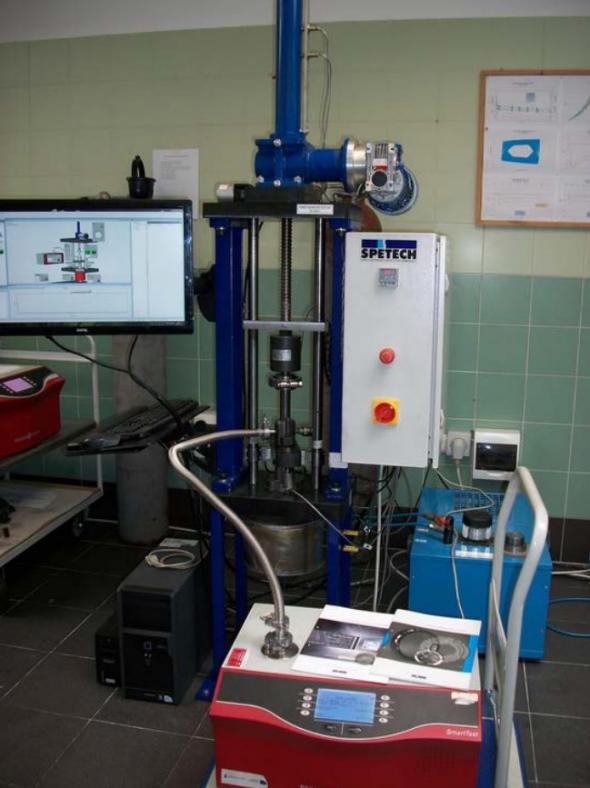 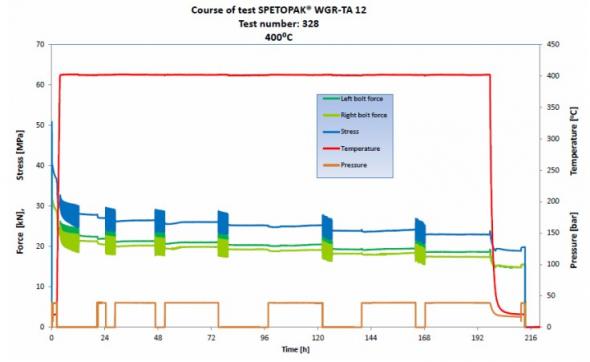 10. Stand for the determination of resistance and resistivity of sealing materials

A stand for the determination of resistance of sealing materials in line with the PN-EN 61340-2-3 standard. It is used to determine the value of resistance and the volume and surface resistivity of all materials, mostly those used in sealing technologies. The obtained data is helpful in the selection of gaskets in the process of design of machines operating in environments specified by the ATEX directive. 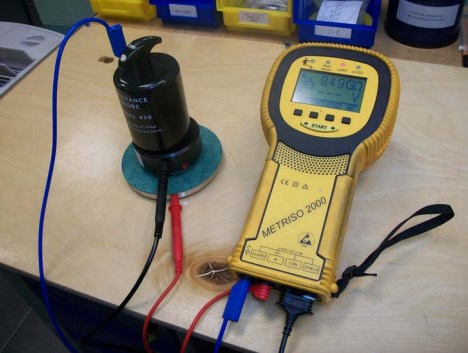 Resistance measurement of a fibrous-elastomeric material.

11. Determination of the emission value

The service consists in determining the helium tightness (or with the help of nitrogen mixed with helium) of a part of a pressure system or a pressure vessel. Two variations of this method can be distinguished. The first involves the use of the vacuum method, in which the whole of the tested fragment of the installation or its part is closed in a sealed container. A helium spectrometer used to measure emissions creates a vacuum in the container and catches helium particles that pass through parts of the pressure equipment. The second method consists in "sniffing" the probe at places on the device that can potentially cause leaks (joints, cleanouts, lubricators, welds, etc.). A helium spectrometer is also a leak detector. For the tests, a detailed report is prepared containing information on the locations and volume of the leak.

Testing the opening of safety valves is often problematic and burdensome for users, because it requires stopping the installation, emptying it of the medium, disassembling the valve, installing it on the test stand and reassembling it.
The SpetoValve service is a response to the needs of our customers to perform valve tests without interrupting the installation operation, in a much shorter time than in the case of the traditional method. Periodic control of safety valves opening is a mandatory activity, regulated by legal regulations.
No need to disassemble the valves is of great importance for the smooth operation of the entire plant: it does not cause downtime and allows you to significantly reduce control costs. After its completion, the client receives a detailed report on the service provided.
The SpetoValve service can be performed on almost all media (except some crystallizing media), also in "Ex" explosion hazard zones.
The tests are aimed at checking the correct operation of the safety valve setting installed in the plant and during operation, no need to disassemble and remove the valve from the installation.
The scope of research activities includes: control of the conditions for conducting the research, research procedure, preparation of a report. The service is dedicated to for heat and power industry, gas industry, chemical industry, refining and petrochemical industries, and oil mining. 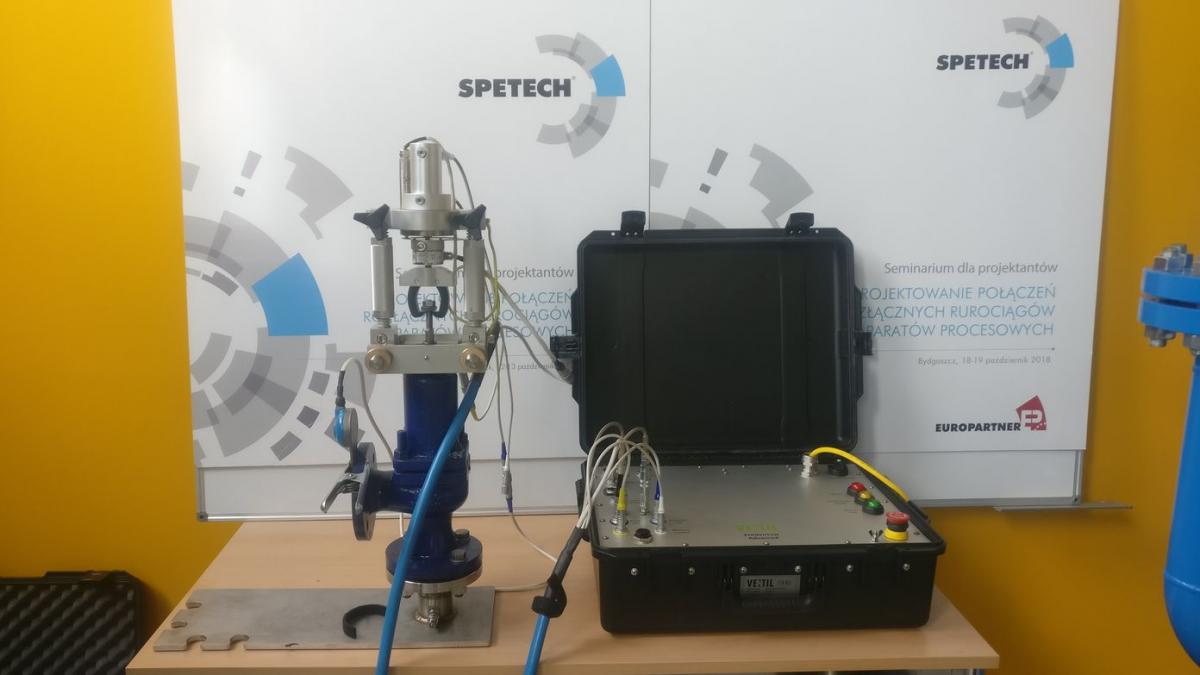 The appearance of the test stand mounted on the valve. 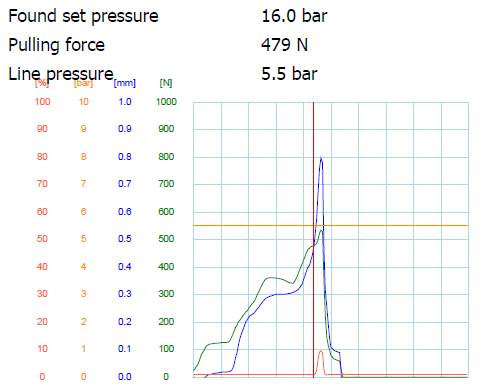 An example of a graph from the test run of the safety valve. 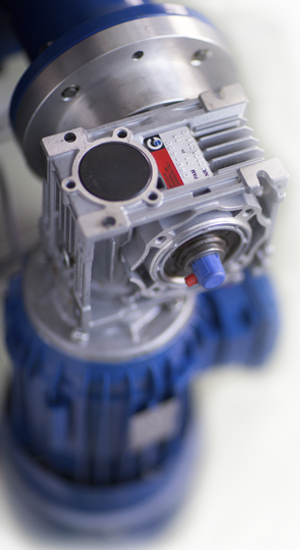